Kokoda was arguably Australia’s most significant campaign of WWII. More Australians died in the seven months in 1942 of fighting in Papua, and the Japanese came closer to Australia than in any other campaign.

Walking the Owen Stanleys in peacetime is in rather sharp contrast to fighting a war in the same country, and here is an unedited letter sent back to base during the Kokoda Campaign by Pte Barney Findlay, a young AIF soldier of Mangrove Mountain (NSW): 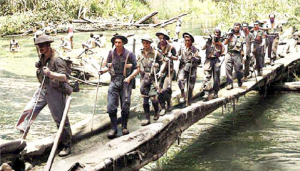 Some of the old unit are so thin now that you would be shocked to see them. This trip is a physical nightmare. We have been overloaded all the way, and all of us are carrying on our backs more than native porters do. Remember those tinpot marches of two hours in the morning we used to grumble about? They weren’t very much training for this. Yesterday we were twelve hours on the track and most of us were ‘out on our feet’, but we had to keep going. It’s hard to explain how gruelling these marches are, but I’ll try.

You spend four hours rising 2,000 ft painfully step by step with your heart pounding in your throat, resting every 100 ft of rise. And then, when you gain the top, it’s only 15 ft wide, and you immediately start to descend 2,000 ft. This is dangerous as well as painful, because you get ‘laughing knees’, and only your prop stick in front of you keeps you from falling headlong. The farther down you go the weaker your knees become, but you don’t lie down and die as you feel like doing, you keep resting and going on and on.

At the end of the day, after, say, eight bitter hours of travelling, you have moved two miles onward, but you have surface walked eight or ten miles, and overhead you can see the planes roaring by, covering in fifteen minutes the distance it takes us five days to do. One of our chaps was a wreck at the finish.

The first night out we slept in a shelter of bushes many thousands of feet up, but none of us could manage sleep. Next day we were caught in a fierce storm, and staggered and slipped through it for two long hours. When we rested, we lay out in puddles in the pouring rain, panting and steaming and wet through in the fullest sense of the words.

But you had to keep going. Everything was wet and heavier now, and although not yet halfway we had to finish that dreadful 2,000 ft climb. At nightfall we staggered into a ramshackle native grass hut. It had no sides, and the rain was driving in on us all night. One of the men sat up all night.

At an altitude of 4,000 ft I lay on the bare ground all night in wet clothes. It was bitterly cold. As soon as we settled down the native rats started. One of them ran across my face and scratched my nostril with his sharp claws. They kept running over my body, and when I dozed off they started nibbling at my hair. The chap next to me had a patch nibbled completely out of his hair by morning.

He was very tired, and I kept waking up and disturbing him. The bugs got to work then and started biting my hips and my ankles, which were itching like fire that night and all next day. By mid-morning the chap I was with was in a pretty bad way, but we had a twelve-hour stage to do, and we had to keep going. It is usually half a day to climb a ridge and half a day to go down, and we had been doing a ridge a day. Now we had to go down a ridge, up a ridge, and down a ridge again.

It was the cruelest day I’ve ever spent in my life. Each time I stopped my calves cramped, and by the time I had walked the cramp away I was too tired to go on, and I had to. Then I’d get cramp again.

You might ask why I or anyone else kept going. You keep going because you have to, and because if you stop you stop nowhere, but if you keep going you might get somewhere. Everybody vows that never, never will he do it again. But there are days of this ahead of us, and the Japanese somewhere beyond.

Gee, this is tough country. The farther you go the tougher it gets, but so long as a chap doesn’t get sick he can hang on somehow. And Kokoda is somewhere over those ridges.

All the water has to be carried by hand, and it is very precious. No wood will burn unless it has been roasted over a fire for many hours. So far we haven’t been able to live off the country, as it would be like slow suicide. But one of these days we’ll get to Kokoda …

On one section of the track where the country was comparatively easy, a young AIF sergeant pointed out something to me in a copy of an old newspaper that had drifted around the jungle clearings. On one page was a report of the terrible fighting during the Allied retreat from the Owen Stanleys in the first week of September, when men were dying in this terrible jungle, and native carriers were scaling greasy precipices with clumsy homemade stretchers bearing haggard Australian wounded. On the back of the same sheet was a column of letters to the editor.

‘It doesn’t worry them much,’ he said, pointing to the column of letters. I looked at them over his shoulder. There were seven letters. One was a complaint that another man in the same business had a petrol ration greater than that allotted to the writer. One condemned morals of soldiers. Two were concerned with the government’s ruling on holiday pay for Cup Day. One discussed the latest Mr Ward controversy, and two condemned the single cuff shirt as a false economy.

Well, those things were probably important to the people who wrote them. Nobody had thought the Owen Stanley battle worth writing to the editor about. Or perhaps people who really think about these things don’t write letters to editors.

Reprinted from The Argus (Melbourne), 9 November 1942