Like many Australian ex-service men, Lt Colonel Leslie FS Hore, MC MID went to the former German colony of New Guinea after WWl. When he died in 1935 he owned a plantation on the island of New Ireland. 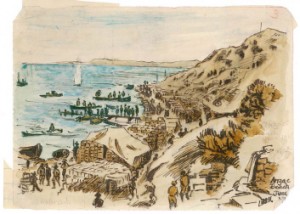 During his war service with the 8th Light Horse Regiment (LHR) at Gallipoli in 1915 Leslie
Hore produced 32 water colour paintings and drawings and  another 70 pictures during his
service on the Western Front. He was badly wounded during the infamous charge at The Nek in August 1915 when the 8th LHR was nearly wiped out.

In 1919 Leslie Hore gave his WWI pictures to the Mitchell Library, Sydney before he went to Rabaul with the Australian Naval and Military Expeditionary Force (ANMEF). The pictures are on the NSW State Library website at www.sl.nsw.gov.au

Click on Manuscripts and Pictures and search for Leslie Hore. 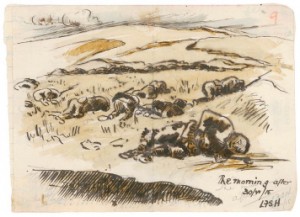 The Australian Department of Veterans’ Affairs education website at http://anzacsite.gov. au/5environment/hore/hore.html has a section about Leslie Hore and his Gallipoli pictures. The National Library of Australia
website, http://trove.nla.gov.au/picture/ result?q=Leslie+Hore has a link to a photos of Leslie Hore.