Kina, at Number One Gold in the Sepik

Kina was born on Baluan Island in the Admiralties, and for as long as I can remember this proud and charismatic man had been a player in many of the adventurous, larger-than-life, stories told to me by my father-in-law, Jack Thurston. Jack and Kina shared a lifelong bond as they had been through many tough times together—before, during and after the war—and life without the other was inconceivable.

Under the German occupation, Kina was recruited to work on the copra plantations on Manus Island. The Germans were harsh taskmasters, but Kina’s life was about to change when he met Jack Thurston, who had arrived in New Guinea in 1924. Jack was posted to Kavieng with the government but two years later he left the Administration and Kina became attached to him when he was mate on the Meklong, which belonged to WR Carpenter. Jack was involved in many ventures and, in 1926, he acquired land on the south coast of New Britain through Phebe Parkinson and this became Drina Plantation.

Not content to stay put on Drina, Jack accompanied by Kina, set off to prospect for gold in the Nakanai mountains with Dyson Hore-Lacy They came into the area on the heels of a syndicate led by ex-patrol officer, Ginger Nicholls, also looking for gold. The party had upset the local Nakanais who raided their camp and killed four of them: Collins, Fisher, Marlay and Page. It became known as the Nakanai Uprising. 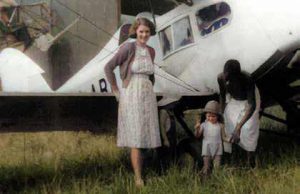 Jack was unaware of the hostility he’d walked into, and was sitting by the campfire one night cleaning his Colt, when the locals attacked. Out of the darkness a spear pierced through his left thigh and into his right leg. Jack fired a couple of shots into the night and, in searing pain, he crawled out of the hut and broke the spear himself. Unable to walk, it was Kina who carried him out of the bush and down to the coast on a three-day trek.

Fast forward to 1935 and Jack, always looking for opportunities, had taken out a lease prospecting gold in the Sepik with the Tudors. Kina was with them to supervise camp duties. When the Japanese invaded PNG in early 1942 there were no plans in place to evacuate civilians from Wewak. Kevin Parer had flown Jack’s wife, Betty, and young Jackie down to Lae when all the Australian women and children were ordered to leave New Guinea just before Christmas in 1941, but the European men were left to their own resources. 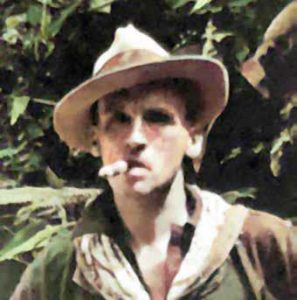 Jack having served in the First World War was too old to enlist, but was eventually commissioned into the RAAF and provided intelligence to the United States armed forces because of his knowledge of the islands. In April 1942, with no escape routes available from Wewak, he was instructed by DO Jones to lead a party of European men to the headwaters of the Sepik River, across the backbone of unknown PNG and down the Fly River to the Papuan coast. This epic journey began in April 1942 and finished in September at Daru.

Kina was supposed to accompany the party, but he was ill with dysentery and malaria at the time. However, Jack convinced Kina that the Australian forces would arrive and drive the Japanese out of New Guinea. He instructed him to help them when they came. ‘You be spy,’ he said.

Kina was captured by the Japanese and along with 200 others from Maprik, he was taken to Muschu Island, ten miles off the north coast. Remembering Jack’s words, Kina toiled for two years as a slave for his cruel captors—all the while plotting his revenge. He kept his plans to himself as local islanders were friendly with the Japs and had become collaborators betraying mainlanders who criticised them. He saw many of his countrymen beheaded or mutilated.

By late 1944 Kina’s patience and obedience were rewarded. Being a skilled boatman, he was given a job as a canoe courier between Muschu and Kairiru Island, which was also held by the Japanese. While delivering the enemy messages, he learnt that the Australian Infantry Forces (AIF) were pushing back the Japanese, and would soon be making an assault on the north coast. Early in 1945 with the AIF only sixty miles away, Kina decided it was time to join them or die in the attempt. 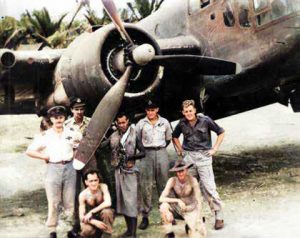 One night he stole a large canoe and with ten native women—who were all wives of the Maprik men the Japanese had butchered—and two children and they set out for the mainland. Under cover of darkness, the group paddled for twenty hours before they reached the coast north of Wewak. Kina hid the women and children in the jungle and then, skirting Japanese machine-gun posts, he met up with forward patrols from the Sixth Division.

Kina had a plan. He told them the Japanese would be retreating to Muschu and he knew where their powerful gun emplacements were hidden in the valley. He insisted if the Australians could take him in one of their bombers, he would show them where the guns were.

A special correspondent from the Sydney Morning Herald later reported the story:

The AIF handed Kina over to the RAAF and from a Beaufort bomber he waged his own section of the New Guinea campaign. The RAAF crew strapped a Mae West life jacket around his torso and allowed him to sit behind the machine gun in the nose of the plane while he directed the pilot to the hidden gun positions.

At treetop level over Muschu, the navigator tried to shove Kina aside in order to operate the gun, but he would not budge. When they were right on target the air crew knew why. Kina was an expert marksman and he knew as much about guns as they. He also had a grudge to settle. While the Japs scattered from the plane’s bombs, Kina mowed them down. In three runs over their positions he killed at least 200 Japs.

The RAAF gave him full written credit for his performance.

This is to certify that the Manus native Kina recently escaped from Muschu Island this day flew as a crew member in Beaufort Aircraft A9-647 for the purpose of locating enemy targets on Muschu and Kairiru Islands … During the flight of two and a half hours, he successfully operated the nose guns of the aircraft, firing approximately 2000 rounds of .303 ball and tracer in strafing runs against enemy positions. 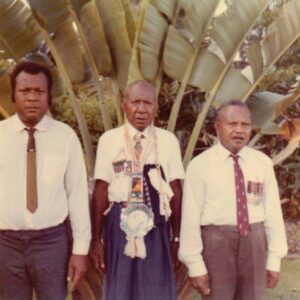 Ben, Kina and Kanaui—Kina is dressed in ‘Royal’ regalia for the Queen’s Rabaul visit in 1974

The Australian government added further recognition of Kina’s services when it named one of the Commonwealth Shipping Board’s island workboats, Kina, in his honour.

After the war, Jack and Kina were reunited. It had been an extraordinary and brutal chapter in the history of the country, and many acts of unyielding bravery exhibited by Papua Niuginians throughout that time will sadly never be told.

Kina and Jack remained a formidable team for the rest of Jack’s life. Both were strong willed, enterprising and independent: it was truly a partnership of equals. Whether it was on one of Jack’s plantations or one of his cargo ships, Kina was never far away. He often accompanied Jack and Betty to Sydney, where he was a familiar sight crewing boats around Rose Bay and Vaucluse.

One of my cherished memories of Kina is watching a video of the Royal Wedding between Charles and Diana at the family home in Rabaul. The two of us sat up late into the night surrounded by Kina’s royal memorabilia brought out for this auspicious occasion. They were kept in a special box along with the books Betty had given him. Kina knew the names and rank of all the guests in the wedding party. The Queen’s visit to Rabaul on the Britannia in 1974 had been one of the highlights of his life.

Jack and Betty died in 1985 within six weeks of each other. Kina continued to live in the house in Rabaul, but he never truly recovered from the loss of Masta Jack and Betty. He died in the hospital in Nonga after an extraordinary life lived to the full. He never considered himself a hero, but when the chips were down, Kina had risked his life for his country, the Commonwealth and his Queen. May his legacy live on with those of us fortunate enough to have known him.