(Part two …to be continued)

Early morning on the 29th we raised anchor and passed Angoram District Headquarters. I had often heard of the mighty Sepik River but I already knew that it was an inadequate description and was adding adjectives to better reflect the reality of the Sepik at the beginning of the flood season – mighty, massive, monumental, majestic – you have to see it to even attempt to understand it and it is not peak flood time yet when the banks of the river will disappear and treetops will be used to define the main river and water will reach the top of the posts of the houses. I try to imagine how families prepare for this season – dry firewood, stored sago – everyone would have to work hard, very hard to be prepared for flood time.

The river truck is ready and we head off to visit Kambaramba Village No 1. Two wider barats were blocked with debris so Councilor Nelson whose house is on the main river joined us to guide us to the village. I add mind-blowing to my list of “M” words when we reach the entrance to take us to the village. It was blocked with logs and salvinia molesta weed but we were lucky that some village youth were in the area in their slender dugout canoes. Combining with our crew, they use strength and skill to move logs and weed to provide a passage wide enough for our outboard motor as we inched our way to the lake beyond. For the first time in our expedition we also experienced swarms of mosquitoes to add to the drama. When we broke through to blocked barat the scene that unfolded was mind-blowing for me. In front of us was Kambaramba Village No1. – a village in a lake with just occasional small islands of land.

Quickly, seemingly from nowhere, dugouts appeared from all directions – women with babies, men, youth and small children – all ages – skillfully negotiating the water traffic as a floating market grew around us. Artefacts were handed from canoe to canoe in a co-operative effort to make sales on this rare occasion of visiting tourists, enthusiastic sellers but not aggressive as is experienced in some parts of the world. Their excitement and pleasure to have visitors for just a short time made the battle through the blocked barats all worthwhile.

Too soon we had to head back to the barat out of the lake just stopping to buy some gigantic freshwater prawns (Kindams) from an elderly lady.
Protein is certainly not an issue for the Sepik people – fish, prawns and shell fish are plentiful in the river, plus chickens and pigs on land. But we did not see any elusive crocodiles in our journey; the river is too high Sir Peter explained so the crocodiles are underwater or have moved inland to find some exposed banks to sun on. The people and animals live in harmony as they adapt to the rhythm of the river. It means that I must return again to see the Sepik in the dry season.

Once back to the main river we head upstream again to visit Moim Village on the river bank (nicknamed ‘Mosquitoville’ by some). Moim has a primary school but no clinic or Aid Post so for medical issues they rely on Angoram District station. A group of us learnt about the raw materials for making string bags and the natural dyes – brown is from the root of the noni tree was the limited knowledge I gained. We were also shown trees used for medicinal purposes – the young shoots of one are boiled and drunk for treating diarrhoea; others for treating fungus and so on. Some studies have been done of traditional medicines in PNG but much still remains unrecorded.

Some of us also spent some time watching a group of women weaving sago thatch panels for roofing for a new building and photographed an old woman demonstrating how the bridal headdress is worn. She said that traditionally the bridal headdress was made by all women but now the young girls no longer know how to weave the intricate headdress of natural twine interwoven with shells so the custom is dying out.
Village women pointed out a platform with newly woven decorations and explained that it was preparations for a peace ceremony to be held on the weekend to reconcile with another village after the killing of a young man. I did not enquire if the culprit had been arrested for the murder and, in some ways, it had little relevance compared with the importance of the peace ceremony to bring back normalcy to the two villages involved.
On the trip upstream to catch up with the Kalibobo Spirit we passed the base logging camp and with sadness saw the enormity of the logging industry in just one part of PNG.
After lunch, we were off on the river truck again, this time with Sir Peter to do some artefact shopping. Tambanum Village stretches along the bank of the river and is famous for its carvings – particularly intricately painted face masks. Tambanum village is the largest village on the Middle Sepik with a population of about 3000. An instant pathway appeared lined on each side by carvings and masks of all descriptions. Choice dilemma faced all of us except Sir Peter who simply bought in bulk to resell at the Madang Resort to raise funds for the Melanesian Foundation which returns to the people in many ways – school desks, clinic equipment, medical supplies, school supplies and so on. 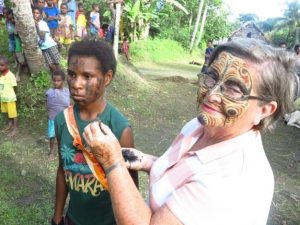 Some of us volunteered to have our own faces painted in a style of one of the masks which we then purchased. I lay on the bench in the Haus Tambaran (Spirit House) which allowed for female tourists to enter and looked at the roof while an elderly artist transformed my face. I pondered on the mysteries of the Sepik. Generations of elders had transferred their traditional knowledge to the young men under this same ancient roof – a roof blackened by years of smoke and laced with spider webs. The Sepik is a river full of mysteries for the outsider to ponder on.
The river truck left Tambanum loaded with artefacts but also with sadness that the decline in the tourist industry had impacted the economy of the village so much. It was a matter of concern voiced by so many craftspeople along the avenue of superb artefacts.
And the day was still not over for some of us because Dr Jo was interested to visit the Timbunki Mission Health Centre. We found the Sister in Charge, Anna Kupbamain, sweeping the lawn that was already immaculate and she pointed out the various buildings and their purposes.

Only two in-patients were there because all others had been discharged for the Festive Season. One was a teenager who had been “bitten” by a buffalo when hunting for food. The wound which indicated being gorged rather than bitten was badly infected and his thigh was double the size of the other leg. The Muellers and I watched as Dr Jo examined his condition with some concern. She suggested lancing but the boy’s mother looked very concerned. I realised later that his timid mother possible interpreted my talk about ‘cutting’ the wound (my pidgin version of ‘lance’) as amputating his leg – if so no wonder she looked concerned!! We left wishing him a speedy recovery as we headed off to visit the church and priests. The story of the ‘buffalo boy’ continues later in our journey.

There are presently two priests at Timbunki Catholic Mission – one from Poland and one from Indonesia and both had served in the Highlands region of PNG before being posted to Timbunki Mission. They proudly showed us around their church which combined traditional and western architecture and artwork. Before leaving we were contacted by Sir Peter to invite them to dinner on the Kalibobo Spirit with the Catholic Sisters from the Mission as well. Alaister confirmed that 29th December is the Polish Christmas – what a coincidence to be on the Sepik River having dinner with a Polish priest on the date of the Polish Christmas. A really good night was had by all and in typical Sir Peter style the Sisters returned to the Mission with a box of chocolates. What a day it had been! We all crashed to bed without realising that the next day would be even bigger!!

Early on the morning of 30th December, the Kalibobo Spirit headed further upstream into the Middle Sepik. Sir Peter joined us for this very special day that took us way beyond our expectations and in many ways beyond our understanding. By lunch we had reached our destination and headed off in the river truck soon after lunch. 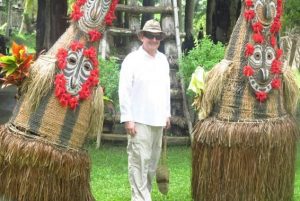 The journey to Kangaraman village sped us through sago swamps and rainforest temporarily disturbing a variety of birdlife that added to the experience. As usual Sir Peter was greeted with great affection and respect. He had been the driving force to have their Haus Tambaran declared as National Cultural Property by the National Cultural Commission of Papua New Guinea. We first entered the mother Haus Tambaran and later proceeded to visit the son Haus Tambaran, welcomed by two masked dancers who danced backwards to the beat of the garamut beckoning us forward.

I was fascinated by the relationship of the Orator’s Stool in the Haus Tambaran to the Speaker’s Chair in our adopted Parliamentary form of government and felt very privileged to view hidden trophies of inter village warfare from the past kept hidden on the upper platform of the Haus Tambaran. As women from outside we were allowed to enter sacred places that the village women would never aspire to enter but I cannot pretend to understand the mystic atmosphere of these sacred places. No- one can be a one-day expert about generations of wisdom, custom and tradition. To visit the Haus Tambarans of Kanganaman village with Melanesian Tourist Services should be on every serious tourist’s bucket list.
From Kanganaman village we headed off again towards the Chambri Lakes. First stop was at Aibom Village to check for their famous pottery. It was with sadness that we found that there was very little pottery. There is no point in making traditional clay pots if nobody comes to the village to buy them. Bruce bought the only ornate pot available and I settled for some less ornate but useful pots for cooking while Sir Peter bought the only large (very large) pot available. We all encouraged the women to maintain the skill but would we maintain the skill in such circumstances?

After viewing an enclosure of young crocodiles in captivity, we headed off again to the Chambri Lakes – a massive inland sea dotted with islands. Cool breezes blowing from the lake made it very pleasant to walk around the village and admire the Aibom Pottery. Much was explained to us but I feel inadequate to transcribe in words the awesome splendour of both Haus Tambarans. How such structures could be erected without modern machinery defies my imagination. We learnt a little about skin cutting initiation from a cutter as we admired his artistry on the back, shoulders and chest of one of his young initiates, who wore his scarification with great pride – permanently marking his transition to adulthood. 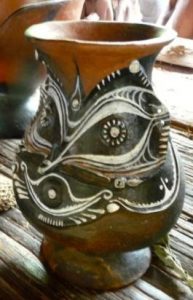