February 1968 saw me back in Kundiawa, administrative centre of the Chimbu District, after my first leave of three months. I actually returned about a week earlier than originally planned, constrained by a broken wrist in plaster and seeking relief from heatwave conditions in Victoria. Having run out of money was a contributing factor too! I had even had to resort to selling my prized short-wave radio to cover the budget. 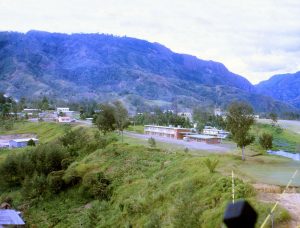 The house I shared in Kundiawa was located directly across the road from the Chimbu Club, renowned for the annual Chimbu Ball, a rollicking weekend-long annual event that drew people from near and far. At other times there was a succession of events, including regular movie screenings that provided plenty of social outlet. Also very strategically located, next door was haus sista where four nursing sisters lived. Two of them worked in the hospital caring for the multitude of medical conditions that came their way, and the other two spent much of their time on the road conducting maternal and child health clinics in the villages of the District.

Houseboys did a wonderful job looking after the various household chores, sometimes in rather trying circumstances. I recall one particular dinner offering at my place that didn’t reflect particularly well on the attention of us two bachelors to keeping the pantry and fridge well stocked: nothing but a piece of grilled tripe in the middle of the dinner plate. Message received loud and clear! 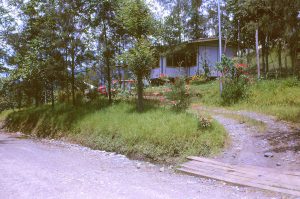 The houseboys had their fun, too. Mekeso, who worked for me and my housemate, and Edward, who looked after haus sista, liked to play cards (ple laki), which just happened to be illegal. The venue was usually Edward’s house and, from time to time, they were raided by the police and finished up in the lock up for the night. Usually someone would be alerted to their absence in the morning when Edward’s wife, Maria, was asked where the breakfast was at haus sista. Someone would then go and bail out the miscreants and normal life would resume—until the next time!

As well as being obliged to patronise the local club, it also seemed that one should do the right thing and get to know one’s neighbours. It was therefore not unusual to gravitate to haus sista. The social scene was therefore pretty much set for the next two years. One of the ‘girls next door’ made a particularly strong impression on me, and Joy and I were married in Townsville in November 1969. 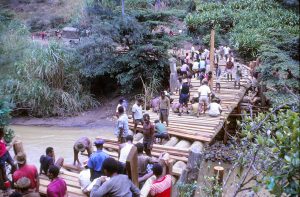 In the first instalment of my story (in the June 2019 issue of Una Voce) I outlined the range of activities that kept a didiman busy around Kundiawa so I won’t repeat them here. One interesting diversion was a cattle disease eradication campaign. This program involved accompanying a vet in a helicopter to visit all the cattle projects in the area and test the animals that the owners had been asked to contain in their yards beforehand. Needless to say, this was a far quicker way of covering the territory than the usual many hours, even days, of walking. 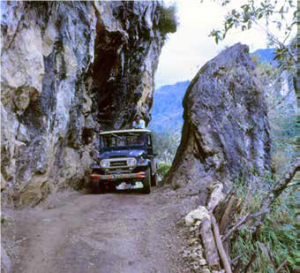 For a time I also had to cover at Gembogl for a colleague who was on leave, and who was then transferred to the fledgling oil palm development in West New Britain. Gembogl was about thirty miles north of Kundiawa, an ‘interesting’ two-hour drive—on a good day, that is, without punctures, breakdowns, bridge repairs or landslips. In wet weather it was sometimes necessary to call on some local manpower to help you up the steeper sections. Manpower was never an issue in that quite densely populated area and a few sticks of twist tobacco or a bit of salt was usually all that was required in payment, cash being of limited use to many of the people.

The main task at Gembogl was to look after the regular buying of pyrethrum. Being at a considerably higher altitude than the rest of Chimbu District, the Gembogl Sub-District produced much more pyrethrum than elsewhere. The country was particularly rugged, lying in the foothills of PNG’s highest peak, Mt Wilhelm (14,793 feet), and ‘eye-level gardening’ was pretty much the norm; flat land was certainly at a premium. 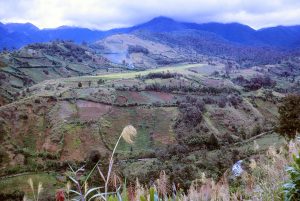 Along with a British medical student friend, Joy and I attempted to climb Mt Wilhelm in 1969. Setting off from Keglsugl airstrip, at an altitude of 8,300 feet, on the first day we walked as far as one of the lakes. The view from the hut where we spent the night was spectacular, looking across the lake to the rugged mountain beyond. There was not a cloud in the sky but the altitude of 11,000 feet or more meant it was fairly brisk and attempts to dry our saturated boots and socks largely failed. Trying to get a fire going in the thinner atmosphere was also a challenge, not helped by the lack of dry kindling and wood. 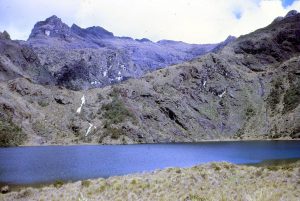 Undaunted, we set off again in the morning, walking through the soggy surrounds of the lake and across numerous icy small streams. After a couple of hours, Joy and I decided to call it a day, reasoning that our time could be better spent trying to organise a bit of a meal and a nice warm cup of coffee for our friend when he returned from his trek to the top. I don’t recall how successful we were in our efforts, but our friend did get to the peak and back safely, albeit not without some scary moments of disorientation in the rarefied atmosphere near the top. He readily acknowledged, later, that walking up by himself was not the most sensible thing to do, but he did have the satisfaction of reaching the top. We were a little disappointed not to be able to make it all the way up, but it was nevertheless a great experience. 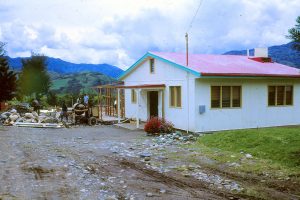 Shortly after I arrived in Kundiawa a new DASF office was built just down the road from the District Office. In not much more than a year, however, the office burnt down. My housemate woke me early one morning and, pointing across the valley towards the town centre, asked if the flames on the ridge were coming from my office. They were! So it was back to square one on the office front, not that I ever spent a great deal of time there. My main regret was that my tyre levers had been lost in the blaze; you could get by without an office, but no tyre levers on the Chimbu roads could be much more of an inconvenience. 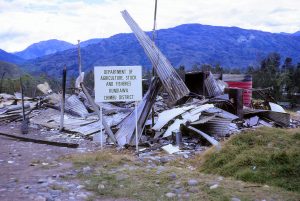 DASF Building after the fire

Everyone worked hard but that didn’t stop us having a lot of fun as well. Apart from our trek up Mt Wilhelm—and, yes, with the benefit of hindsight that does qualify as ‘fun’—a couple of times a group of us chartered the locally-based TAL Cessna 206 for a weekend of R&R at Madang. It was only about a half-hour flight from Kundiawa but what a wonderful place and a whole world away from our Highland home. 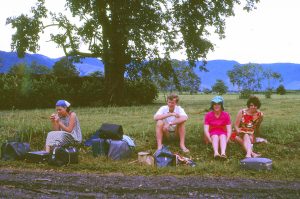 Another trip saw seven or eight of us pack into a ute hired from a local mission and drive down to Lae for the weekend; at least that was the intention. Breaking down in the middle of the Markham Valley on our way home and me having to hitch a ride back to Lae for parts put paid to any ideas we had of getting back in time for work on Monday. To put it mildly, the doctors in charge of the Kundiawa Hospital were less than impressed with having to cope with a severely depleted workforce that day, being down one doctor, one medical student and three sisters! 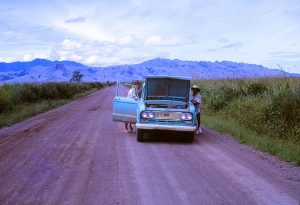 My time in Kundiawa also saw me make a brief foray into the world of journalism. Our lounge room was home to the ‘printing press’—a borrowed Gestetner duplicating machine. With help from a number of other people, my housemate and I published a number of issues of the Kundiawa Organ, touching on a range of topics of local interest. Unfortunately, one article too many touched a little close to the bone and complaints from the manager of the Transport Department led to the demise of this august publication. It seems that people being offended is not a recent phenomenon! 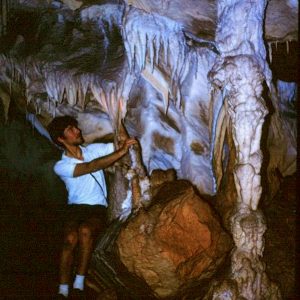 The next instalment of my story will take us to a new posting with DASF in the Gulf District, quite different to the Highlands and, as it turned out, the catalyst for a career change to the PNG Development Bank and lots of exciting new experiences and opportunities for us both.