On 24 September 1970 we made our last canoe trip from Murua to Kerema from where we flew to Port Moresby. I started the next day as a rural officer with the Papua and New Guinea Development Bank. 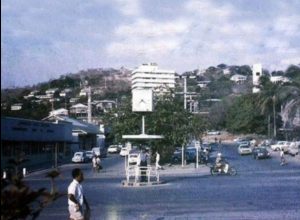 The Development Bank had opened in 1967 in response to a key recommendation of a report by the International Bank for Reconstruction and Development (commonly known as the World Bank) commissioned by the Australian Government. Its principal objective was ‘the promotion of the economic advancement of the indigenous population.’ 1

While the bank’s charter extended to commercial and industrial lending, and indeed these sectors together accounted for almost 69% (49.5 million Kina) of the value of loans advanced in the first ten years of the bank’s operation, lending for agricultural purposes was very significant. In that period, loans for agriculture totalled more than 22.4 million Kina advanced to 10,246 borrowers of whom 9,966 were PNG nationals who borrowed almost 15 million Kina. Cattle accounted for 45% of the value of agricultural loans to PNG nationals, followed by oil palm with 22% of the total.

A group of agricultural specialists formed the bank’s Rural Department—a small number of expatriates with practical experience in the field along with some recent PNG graduates of Vudal Agricultural College. Vudal had been established near Rabaul in East New Britain in 1965 to provide agricultural training for PNG nationals so it was not much older than the bank and some of its first graduates were amongst the bank’s early staff. Almost all the expatriate rural officers had served as field officers with the Department of Agriculture, Stock and Fisheries (DASF) and some also brought with them the experience of having worked on private plantations.

A key role of the Rural Department was to undertake field inspections of mostly large-scale rural enterprises and assess their past performance and future prospects, from both a technical and financial perspective. Both new lending requests and regular reviews of existing facilities were assessed in this way. These assessments formed critical input to the lending decisions made by the bank’s loans staff. The great majority of larger-scale businesses were expatriate-owned although this did start to change slowly over the years as local operators took over some of the properties or set up their own operations.

Another important role of the Rural Department was to review many of the loan submissions for smaller enterprises that had been submitted by the bank’s agents, primarily DASF field staff, through our branches or representative offices throughout the country. While most of this work, which was quite considerable, took the form of in-office assessments, from time to time the nature of the proposal warranted a more detailed field inspection.

Training of the Vudal graduates was important to the future of the bank’s operations so they were closely involved in all aspects of the work done, including undertaking field assessments either in company with the more experienced expatriate rural officers or on their own. In addition to this extensive on-the-job training, they were set specific tasks to deepen their evaluation skills. Over time, and as their skill level developed, a number of these graduates were posted to the bank’s branches in Boroko, Lae, Rabaul and Mt Hagen to support the lending staff there.

My initial role with the Development Bank was Rural Officer, Property Management and Land Subdivision. The purpose of the role as originally envisaged was to come up with means of, ultimately, disposing, in a productive way, of rural properties that had come into the bank’s possession as mortgagee. The great majority of these were plantations that had been developed under the old Ex-Servicemen’s Credit Scheme (ESCS), the assets and liabilities of which the bank took over from the Ex-Servicemen’s Credit Board on 1 January 1969. Under this transfer of management responsibilities a total of 244 loans, around half of which were to Papua New Guineans, with a total debt approaching $7 million came under the control of the bank. 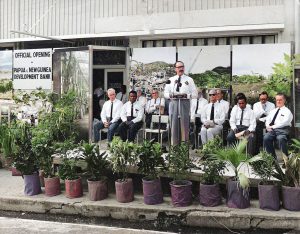 Minister for Territories the Hon. CE Barnes, opening the bank in 1967 – See footnote

While the ESCS gave an important boost to agricultural development through the expansion of expatriate-owned plantations after introduction of the scheme in November 1958, by the late 1960s many of these enterprises had seen better days. Indeed, it is very likely that a number of them may never have been destined to succeed as the key requirements for obtaining a loan were a record of war service and the ability to present a business case that demonstrated reasonable prospects of success. Experience in the chosen enterprise was not a necessary prerequisite for an expatriate to be granted a loan of $50,000. When I joined the bank, a number of properties had already been abandoned and thirteen were already in the bank’s possession with expectations of another seven or so to be taken over in the coming twelve months. Our challenge was to recover as much as possible of the debt, which in most cases was well in excess of the original $50,000 loan. Amongst the properties with which I had some involvement were copra plantations on New Ireland and in the Madang, Milne Bay and Central Districts, rubber plantations at Cape Rodney, cocoa plantations near Popondetta in the Northern District and coffee plantations in the Bulolo/Wau area.

These ‘problem’ plantations were dealt with in a variety of ways. Initially, they were put up for auction but in the event that they failed to reach the reserve price other options had to be pursued. For those that were reasonably viable propositions in their current state the bank appointed managers to ensure the properties were properly maintained and generated as much revenue as possible while sale opportunities were pursued. In some cases nearby plantation owners were granted harvesting rights. Others were subdivided into lots from which smallholder families could generate a reasonable income and were leased to interested local people. The process of subdivision involved considerable liaison with the Department of Lands, to make sure everything we were doing was legally correct, as well as with the prospective block holders. We determined the block boundaries ourselves, which were subject to final approval by the Department of Lands, and prepared maps, budgets and development plans for each block to support the applications for finance submitted by the new owners.

The main area in which I was involved with the subdivision of plantations was Cape Rodney, where the rubber blocks represented an extension of the nearby rubber land settlement scheme which was being developed under the guidance of DASF personnel. The majority of the people interested in taking up these blocks had previously worked on the plantations so were fairly well versed in how to tap and process the rubber. This experience removed one of the concerns that always had to be addressed when lending to rural enterprises, whether small or large: the question of management expertise.

Properties in a more rundown state were sold off to interested expatriates or local groups. In some cases, all that was worth salvaging was some of the plant and equipment. On one occasion I had to try and retrieve a tractor and Land Rover from an abandoned plantation near Marshall Lagoon, 100 miles or so down the coast from Moresby. I was in the area, at Cape Rodney, on other business so got a ride with someone to Kupiano from where we took a dinghy across to the plantation, taking with us a motorbike for the few miles we had to travel to the property once we landed. Retrieving the vehicles would be much easier if they could be driven, so along the way I enlisted the help of a mechanic from the local Salvation Army mission. Try as we might we were not able to get the vehicles going so had to try again another time.

This exercise does, however, illustrate how we worked with whatever resources were at our disposal to get the job done, a feature of working anywhere in PNG at that time. Flying into Cape Rodney was quite straightforward as it was serviced by regular flights. From there, though, I had to arrange to get by road to Kupiano, pick up the motorbike, meet up with the mechanic, then by dinghy across Marshall Lagoon and back again, return the motorbike, then to the nearest airstrip at Paili for the return flight to Moresby. Often we called on the help of people from all walks of life—government departments, private businesses, missions and local villagers—and all gave readily of their time. We, of course, reciprocated as we were able—as I will outline a little later—and this is the way everyone got things done in those days; we applied common sense and didn’t get tied up in too many rules and regulations.

Cocoa plantations in the Popondetta area represented a particular challenge in that extensive areas of plantings had been ravaged by the Pantorhytes weevil, the larvae of which bored into the sapwood of the tree trunks and branches, weakening or even killing the trees. The bank provided considerable support to a number of plantation owners as they explored, with mixed success, various means of controlling this serious pest. Some plantations were taken on by neighbouring growers whose rehabilitation efforts had met with some success while others went into alternative land uses and still others were provided with some form of debt relief to allow them to walk away with some dignity.

The next instalment(s) of my story will look at the broader role I enjoyed with the PNG Development Bank over the seven-year period 1970–77 and how it evolved in that time.

From Meeting the Challenge: The Papua and New Guinea Development Bank 1967-1980, edited and published by Rodney Cole, 2015. This book, which records the early history of the Bank, is available in the National Library of Australia and various State libraries as well as being for sale on Amazon.