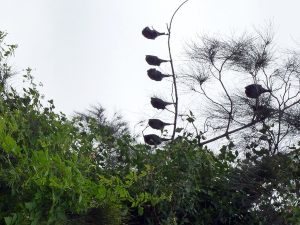 The lowset building that served as the District Office in Madang in the mid-1960s was a dilapidated WWII structure that had received little maintenance since the Army departed in 1946. I believe it was originally some sort of medical facility, built after the Allies re-took Madang from the Japanese forces.

The U-shaped building was in the centre of the small township and there were several additional offices that had been built on adjacent sites to meet the needs of new departments. The interior green paint was peeling and there were at least two long established native bee nests in the hollow plywood walls. The worn concrete floor had been laid with inferior cement and was full of eroded patches. The roof leaked when it rained, and when a severe monsoon deluge set in, the drains would overflow and two or three inches of water would flow through the offices.

After such inundations the smell of decay would disappear for a while but it would return after a week or so. A large drain at the rear of the building was supposed to handle any runoff from the area, but this it patently failed to do. Lining the edge of this drain was a row of tall casuarina trees, the last individual trees in this row providing shade for the office.

About the time we arrived a large colony of Spectacled Flying Foxes (Pteropus conspicillatus) took up residence in these casuarinas (right). These large fruit bats were a nuisance, being noisy and smelly, but after a while, the office staff became used to them and tolerated their presence.

The Ramu Subdistrict was unusual in that it was decided that the Subdistrict Office would be located within the Madang District Office complex. Every other subdistrict in Papua New Guinea had its office on an outstation within the area being administered, and on such outstations this inevitably meant that the Assistant District Officer (ADO) became involved in the day to day running of his station and oversighting the administrative functions such as post office, banking, issuing of rations and payments to staff, being gaoler, and ensuring adequate general station maintenance, including upkeep of the airstrip in many cases.

When it became necessary to create office space for the newly created position of ADO of the Ramu Subdistrict, one corner of the front veranda of the District Office was sectioned off. This provided barely enough space for a desk, chair and a filing cabinet. All of the typing was to be done by the existing office staff, so I became an additional burden to these long-suffering individuals.

As ADO Ramu, I was not saddled with the annoyances of having to run an outstation and was free to concentrate on spending time visiting the four patrol posts and two base camps within the subdistrict. I spent as little time as possible in this office, as every week I would usually be using the government charters to fly to the various outstations in the subdistrict to hear court cases, encourage road developmental programs, carry out patrols or attend Local Government Council meetings. There were no road communications with any of the Ramu Subdistrict outstations and access was only possible by light aircraft.

When I was obliged to spend time in the office, I fell into the general office routine, which, of course included minor socialising during the morning and afternoon coffee breaks. As the DC’s secretary, it was my wife Philippa’s job to collect the money from all coffee consumers to purchase the instant coffee, tea, sugar and powdered milk on a weekly basis. The actual making of the tea and coffee fell to one of the local orderlies in the Madang office, just one of the duties they undertook throughout the day.

For the first few months that I worked from the office, I would regularly drink the cups of coffee and grumble about the unusual taste, along with the other office workers. Then one day I happened to be walking past the rainwater tank at the rear of the office just as the orderly was filling the large urn from which the hot water was drawn to brew the morning beverages. I was appalled to see the colour of the water that was coming from the tap into the urn. It was a very dark brown—about the colour of strong tea. I checked the flow from the tap and the colour was unchanged as the water flowed.

The water in the tank was obviously severely polluted. It was only then that I looked up and realised that the corrugated iron roof of the District Office, from whence the tank received its rainwater, was covered with a thick layer of casuarina branchlets, which must have remained undisturbed for many years. To add to the flavour of the water draining into the tank, many months of flying fox droppings had been added to the layers on the roof. This combination immediately explained the peculiar taste of the coffee and tea which the District Office staff had been drinking for many months.

I went to the District Commissioner and asked the others in the office to come and see my demonstration of why we were being supplied with foul-tasting coffee and tea. I turned on the tank’s tap and all present recoiled in disgust at what flowed out. It was pointless to blame the orderly for not having drawn attention to the situation, as he probably saw nothing unusual in the condition of the water.

The immediate result was that workers were called in and the office roof was cleaned of its accumulated debris and the tank was drained and cleaned. However, the saddest outcome lay in store for the flying foxes. After consultations, the Police Superintendent arranged one day for the shooting of these creatures as they clustered together in their colony in the casuarina trees.

Just about everyone in town who owned a shotgun was assembled at the office and, on the Superintendent’s command, the firing commenced. There must have been about fifteen or more shooters concentrating on a small area of trees, which were very heavily populated with the fruit bats. The death toll was high, with the survivors circling overhead and many being shot out of the sky as they flew around in panic. As the dead bats fell to the ground, the local men who had learned of the proposed massacre were in the area and seized on the victims as they lay flapping on the ground. That evening there were many cooking pots in the various town compounds that contained one or two flying foxes as a flavoursome addition to the usual stolid fare of rice and bully beef.

When we went home that afternoon, I took my usual walk around the garden and found that a small flying fox was hanging on a low branch of our mango tree. It made no attempt to fly away as I approached, and I was able to examine it to make sure that it had not been wounded. It stayed there overnight and was still there the next afternoon.

Assuming it was hungry, we offered it slices of fruit, which it gingerly accepted and ate. It seemed content to stay under our care, although these social creatures normally would live in colonies. For the next few days, we regularly fed this bat until one day it was no longer there and I assumed that it must have overcome whatever trauma had caused it to seek refuge in our mango tree. In those days we had no reason to fear lyssavirus infection from flying foxes, and it became so accustomed to us feeding it that we could scratch and tickle it without concerns of being bitten.

We continued to work in the old District Office until 1970, when a new building at the western end of Modilon Road was completed. It provided a pleasant working environment but lacked the character of the old structure.