The attendance at Brisbane Writers Festival 2016 by three Papua New Guinean writers was a brilliant success. McKinnon-Paga Hill Development Company fellows Francis Nii, Daniel Kumbon and Martyn Namarong travelled from PNG and were joined by Brisbane resident, Rashmii Amoah Bell. As I watched the four writers so capably and eloquently express themselves during their one-hour session at the Festival, I reflected upon the story of how it had happened. I would like to relate that history for the record.

As I read the poetry, prose, fact and fiction in the 2014 Crocodile Prize Anthology, I realised that most of the writers represented were targeting a PNG audience. As excellent as the contributions were, few would excite, let alone be understood by, anyone without some interest in PNG. I thought, these writers need to write for the rest of the world, to allow others to see just how good PNG writers can be.

I’d been attending the Brisbane Writers Festival for some years and realised that future festivals would be the ideal event from which to launch PNG writers into the international scene. I sounded out the idea with people I know who organise the festival and was delighted to discover their enthusiasm.

So I submitted a formal proposal for the organising committee to consider. The interest continued, particularly from chief executive officer Julie Beveridge. With that encouragement, I emailed Keith Jackson with the idea. He jumped at it straight away. We quickly agreed to share the cost of bringing a writer to Australia for the 2015 festival and chose Jimmy Drekore. The organisation of that festival was already too far advanced to enable PNG to participate, but Julie wanted to meet Jimmy to discuss future festivals.

So Jimmy came to Brisbane and he, Joycelin Leahy and I met with Julie, who assured us that she would provide a one-hour session for PNG writers in 2016. And that, of course, is what has just happened. The national passion of the four writers was plain to see on Friday. I felt deep satisfaction with their achievement. 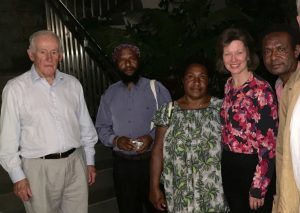